Description of the Spider

These creatures all share the same eight-legged body structure with a cephalothorax that contains their head and legs, and an enlarged abdomen. These arachnids also have fangs on their mouthparts that they use to inject venom. They vary greatly in coloration, pattern, and size.

Some species in this group have bodies so small that you can barely see them. The smallest species grows to just 0.015 in. long. Conversely, the largest members of this group can reach a diameter of one foot across or more!

Interesting Facts About the Spider

You can find a wide variety of traits and adaptations across the 48,000+ species in this group. Learn more about a few specific species, below.

Habitat of the Spider

Different species in this group live in a wide variety of different habitats. Some of the many types of ecosystems you can find these creatures in include woodlands, forests, wetlands, grasslands, deserts, rainforests, and more. Some live in trees and shrubbery, some live on the ground, and some even tunnel underground.

Distribution of the Spider

These arachnids live virtually across the globe. In fact, you can find them on every single continent, with the exception of Antarctica. They have widespread global distribution. Some species live across vast expanses, while others utilize only a few minute regions or a single island. Each has its own unique range and distribution.

Diet of the Spider

The vast majority of species have carnivorous feeding habits, which means that they eat other animals. Most species have insectivorous diets, and eat primarily insects. However, some also feed on small animals like lizards, frogs, and even birds or small mammals. Each species has its own unique dietary preferences.

People interact with these creatures in a wide variety of fashions, often indirectly or accidentally. The immense majority of species do not pose any danger to humans. However, some species do pose a threat, and some people consider certain species as pests.

Sadly, human activity has placed some species in this group at risk of extinction. Habitat destruction and pesticide use can decimate populations and even entire ecosystems. The impact ranges from species to species.

Does the Spider Make a Good Pet

Some species do make good pets. However, you should never keep any wild-caught species as a pet. Captive-bred and socialized individuals of certain species can have friendly and calm dispositions.

Care for these creatures varies greatly depending on the species at hand. Some prefer moss or mulch substrates, while others utilize sand or dirt. The temperature and humidity vary based on what the animal typically experiences in its wild habitats. However, you can typically feed these arachnids a diet of small crickets, mealworms, and other small insects.

Behavior of the Spider

The individual behavior of these creatures varies drastically. Some species live solitary lives, only converging to reproduce. Other species live in large communal webs, or congregate in large numbers under the right conditions. Some hunt actively for prey while others lie in wait for food to come to them.

Reproduction of the Spider

The reproductive rates of these creatures vary drastically. Some perform elaborate courtship dances, and in some species the female eats the male!

In most cases, the females lay eggs, which then hatch into young. Though egg fertilization occurs internally, the males typically pass the females a “packet” of sperm, known as a spermatophore. She then uses this to fertilize her eggs.

Beliefs, Superstitions, and Phobias About the Spider

Many people villainize these misunderstood creatures. While some species can reach large sizes, and some species can pose a danger to humans, most do not harm people in any way. In fact, many species actually benefit humans. Spiders feed on a variety of different insects, many of which can damage crops or pester humans. 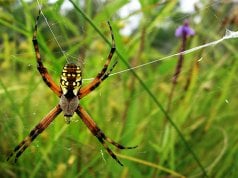