Wild animals are beautiful and fascinating components of the natural world. That’s part of the reason that people often love to photograph them, paint them and even read about them online.

But that doesn’t mean everything wild animals do is beautiful. In fact, many animals do things that are completely disgusting. We’ll talk about some of the best examples of animals engaging in disgusting behavior below.

Just make sure you aren’t eating while you read this! They feed their young by regurgitating into their youngster’s mouths.

When most people think about songbirds, they imagine beautiful colors and soaring melodies. But even the most colorful songbirds do some pretty disgusting things – especially when they’re raising their young. Many songbirds spend a lot of time and energy taking care of their offspring. This is important, as many hatchling birds are unable to fly or catch food themselves. Some can’t open their eyes for the first few days they’re alive.

But how can a bird feed its young?

If it catches a bug and brings it back to the nest, the bug may just fly away before the baby birds can eat it. Most fruit is too large for baby birds to eat, and many seeds have shells that are too hard for young birds to crack open.

So, songbirds – and many other types of birds – have figured out a way to work around this problem.

They start by finding a worm, insect or fruit that would make a good meal. Then, they swallow the entire food item and hold it in a special storage organ called a crop.

They then fly back to the nest, where they regurgitate (throw up) the food right into the mouths of the hungry babies! Baby songbirds will eat this way until they are old enough to handle normal food.

They eat dead animals — even if that means sticking their head inside the dead animal’s body.

Vultures are often associated with death, thanks to their habit of eating dead and dying animals. And while the idea of eating a dead animal that has been rotting in the sun is pretty gross, the details involved are grosser than most people realize. Most dead animals begin to smell very bad as bacteria begin causing the body to rot. And while many animals – including humans – find this odor to be extremely disgusting, it makes vultures hungry.

In fact, many vultures find their food by searching for the smell of dead animals.

Once they arrive at the carcass, the vultures begin feeding on the dead animal. But they don’t start just anywhere – they usually start by eating the eyeballs.

After the eyeballs are gone, they’ll start eating the soft areas of the dead animal, which are easy to rip open with their beaks. Eventually, the vultures will have to stick their entire head and neck into the dead animal’s body to pull off strips of flesh.

In fact, this is part of the reason that most vultures don’t have feathers on their head. If they had head feathers, they’d just become drenched in blood every time they ate.

They eat feces when they can’t find enough food.

Tortoises are beautiful reptiles, who live in forests, deserts and fields around the world.

Tortoises use big shells to protect themselves from predators, but these shells are so heavy that it makes tortoises very slow. This limits the type of food they can eat. After all, you can’t expect a slow tortoise to catch a fast-moving prey animal like a lizard. So, most tortoises are herbivores, which means they eat plants instead of animals. Most species eat fruits and flowers, but some also eat grasses and leaves.

But there’s a problem with this strategy: Most plants don’t have a lot of energy inside them, so tortoises have to spend a lot of their time looking for food and eating.

Normally, tortoises don’t have trouble finding enough food to survive. But occasionally, other herbivores will eat all of the plants in an area, or the plants will die because of a drought.

When this happens, tortoises can become very hungry, as they can’t find enough to eat.

This forces tortoises to consider eating something really disgusting. They may have to eat feces (poop). Animal feces often has undigested food inside it, which the tortoise’s body can use for energy. They may eat the feces of just about any other animal, and sometimes they end up eating the poop of other tortoises.

But while tortoises may eat feces when they are starving, some animals do it all the time. We’ll talk about one of these animals next.

Dung beetles are small to medium-sized insects who live in a variety of habitats around the world. There are a number of different dung beetle species, and each behaves in slightly different ways.

However, all dung beetles have one disgusting thing in common: They eat dung (another word for feces or poop) for their entire lives. In fact, adult dung beetles often collect feces and form it into large balls. They then roll the ball of poop to a safe place and lay eggs inside it.

This way, when the eggs hatch, the young have plenty of food around them to eat. Eventually, the young dung beetles eat all of the feces, grow up, and begin trying to form their own dung ball in which they’ll lay their own eggs.

And while the idea of eating poop certainly sounds gross, it actually serves an important purpose. Some animals – especially big ones, like elephants and rhinoceroses – produce a lot of waste.

Over time, this waste would build up and cover the ground. But because dung beetles have evolved to eat waste, this doesn’t happen. 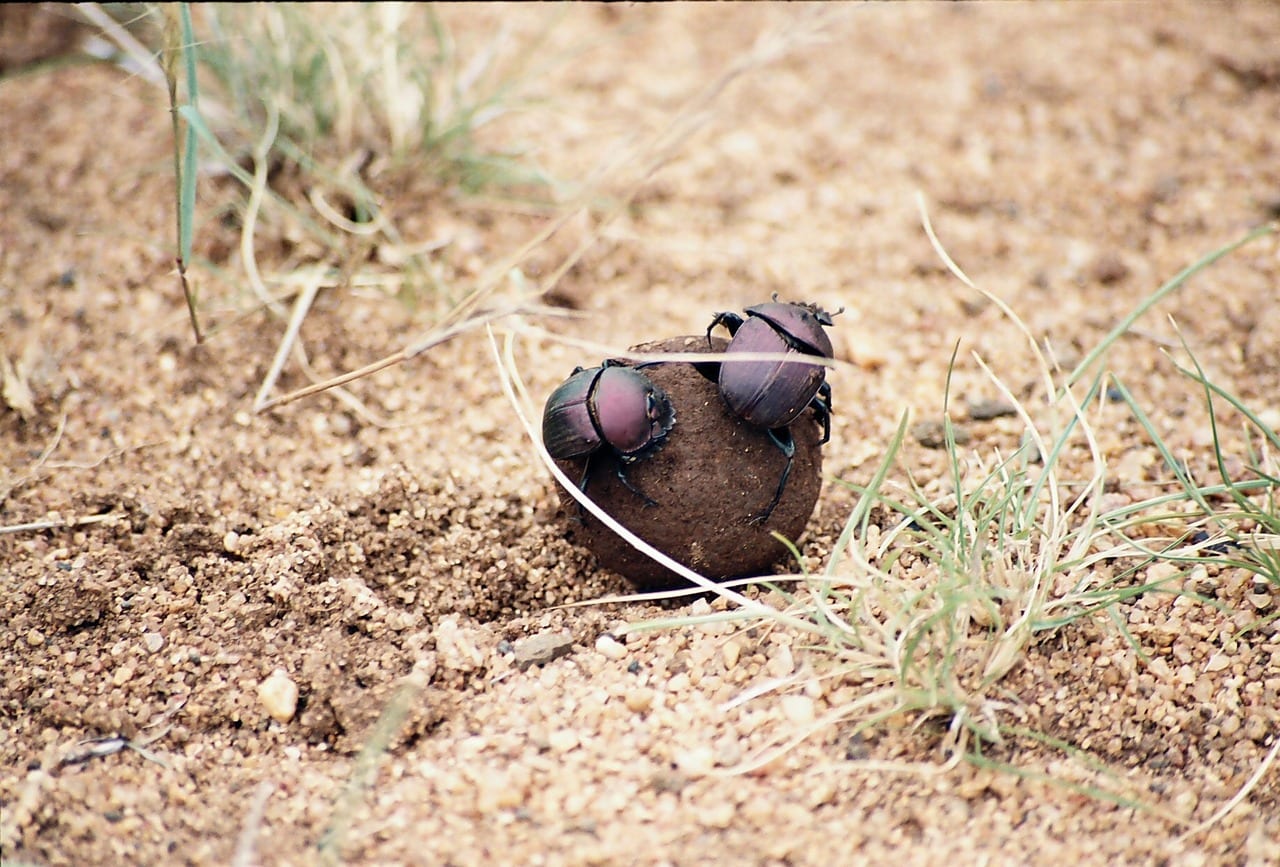 It is important to understand that while people think some of the things animals do are gross, these behaviors are completely normal for the animals. Dung beetles don’t think it is gross to eat feces, nor do vultures think plunging their head into an animal carcass is disgusting. This is just how these animals have evolved to survive.

Can you think of other gross things that animals do? Tell us some of the things you think animals do that are gross in the comments below.