Approximately 65 species living in the world’s oceans are known as flying fish. Famous for their wing-like fins and habit of leaping out of the water, these fish are important components of marine ecosystems. And although they may seem exotic, they’re quite common. You can often observe them while riding on cruise ships and other boats in deep water.

But are these fascinating fish really capable of flying? We’ll answer this question and explain more about these amazing creatures below.

Flying fish can leap out of the water, but they can’t actually fly.

True flight requires an animal to use muscle power to rise above the ground (or, in this case, water). Only a few types of animals, primarily birds, bats and insects, have mastered this skill. However, many other animals – including flying fish – have learned to glide. Gliding is different from flying, as it relies on an animal’s forward momentum, rather than powered wings, to keep it in the air. When a flying fish decides to take off, it races toward the surface, extends its wings, and thrashes its tail rapidly. In the process, the fish reach very high speeds. Once they leave the water, they are able to glide thanks to their outstretched wings.

But flying fish are not capable of rising into the air in the same way that bats, birds and bugs can. In fact, it would make more sense to call them “gliding fish,” rather than flying fish.

Why Do Flying Fish Leap Out of the Water?

Flying fish glide out of the water to escape predators.

Fish don’t evolve wing-like fins and gliding habits for fun (although it must surely be!). They’ve evolved these traits and behaviors to help them survive. Specifically, wings have evolved to help flying fish escape predators. Most flying fish species live in open water habitats. Out it the open ocean, there aren’t many places for fish to hide from predatory fish. All that most species can do is to form large schools and swim away as fast as they can. The fleeing fish usually end up swimming just below the surface of the water. Unfortunately, predators can usually catch them easily when traveling beneath the surface.

A variety of predators living in the open ocean eat flying fish. Some of the most important include mackerel, swordfish, sailfish and marlins. Squid may also feed upon flying fish from time to time, as will small shark species. These fast and agile predators are all very well-suited for catching flying fish – at least until the flying fish leave the water. However, it is important to note that they aren’t specifically targeting flying fish. Instead, they simply try to catch whatever small fish they can find lurking near the surface.

Several ocean-going bird species also consume flying fish. This includes everything from gulls and pelicans to frigate birds and petrels. Humans also eat flying fish in some portions of the world. But humans obviously use boats and nets to catch them.

How Far Can Flying Fish Glide?

Flying fish can glide incredible distances over the surface.

Even though they can’t technically fly, flying fish can certainly cross vast distances when they leap from the water. Typical flights are usually about 150 feet or so and last about 20 seconds. However, flying fish occasionally travel much farther through the air. Some have even been observed gliding nearly 10 times this distance across the surface. During these long flights, the fish may remain in the air for more than 40 seconds. Flying fish are only able to glide for such distances by traveling very fast. Remember, they cannot technically fly; they can only glide across the surface. But by swimming at very high speeds, they can propel themselves over the surface for great distances. In some cases, flying fish have been observed reaching about 40 miles an hour when gliding through the air.

Most flying fish stick pretty close to the surface of the water when gliding. After all, they are largely safe from predators once they exit the water. However, they occasionally get carried by updrafts and end up rising high above the surface. Some flying fish have even been seen gliding 20 feet or more above the water. Sometimes, flying fish accidentally land on the decks of boats that intersect their path.

What Do Flying Fish Eat?

Flying fish eat foods that are common near the surface of the water.

Most flying fish species are pretty small. Very large individuals may reach 18 inches in length, but most are much smaller. The average flying fish is probably about 7 or 8 inches long.

Because flying fish are relatively small, they must survive by eating small food items. Most species focus on plankton – tiny marine organisms found near the surface of the ocean. Planktons are very good food sources for the fish, as they aren’t fast, nor do they have any other significant defense mechanisms.

This means that flying fish can simply swim up to plankton and gulp them down. The water swallowed in the process will be pumped out of the fish’s nostrils or gill slits, and the plankton will be swallowed. 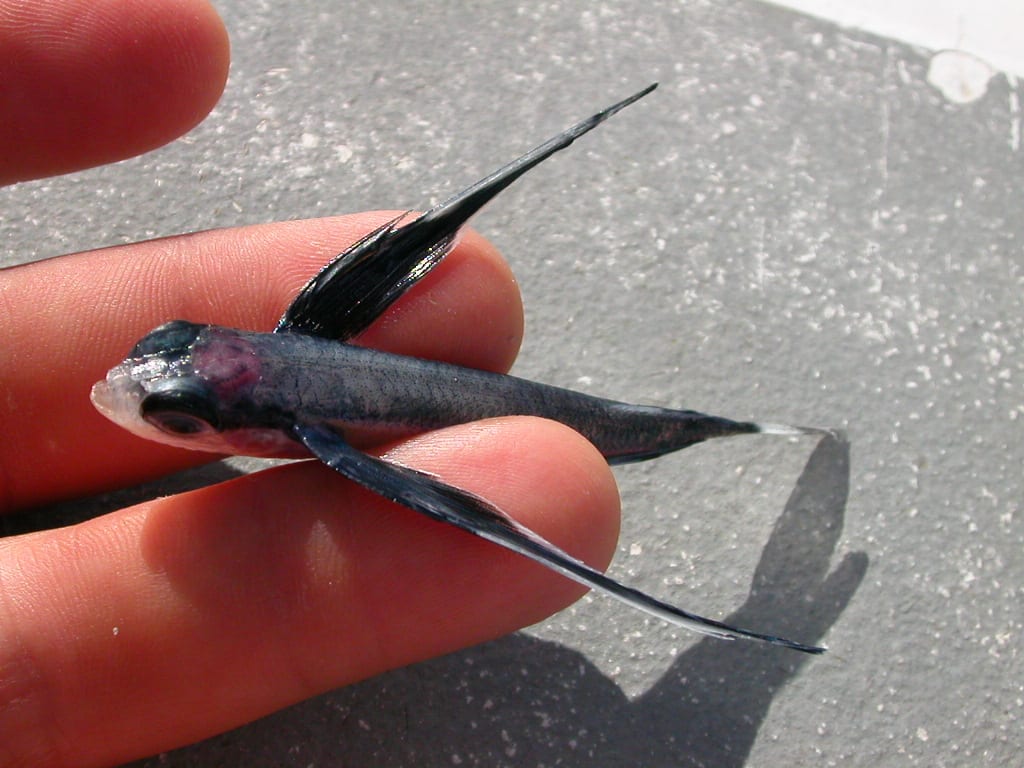 Flying fish are certainly fascinating animals, even if their name is a bit incorrect. They represent a great example of animals that have evolved special defense mechanisms that help them to avoid predators.

What other animals can you think of that have evolved unusual defense mechanisms to avoid predators? Let us know your examples in the comments below.