People refer to a number of different invertebrate creatures as “Jellyfish.” However, researchers place the true Jellyfish in the taxonomic class Scyphozoa. They currently recognize about 200 species in 20 different families, but there may be as many as 400 different species in this group! Read on to learn about the Jellyfish.

Description of the Jellyfish

These creatures come in an immense variety of shapes and sizes. Generally, their bodies consist of a rounded bell with a mouth on the underside. Shorter tentacles and longer stinging arms generally grow from the bell.

Size varies drastically from species to species. Some measure less than an inch across, while others reach six feet in diameter or more!

Interesting Facts About the Jellyfish

The immense variety of species possess a number of different traits and adaptations. Learn more about what makes a few specific species unique, below.

Habitat of the Jellyfish

Distribution of the Jellyfish

These creatures have global distribution. You can find them in every ocean on Earth. Each species has its own unique range. Some species live across vast expanses and have cosmopolitan distribution. Other species live only in small regions. The populations of many species overlap with those of other species.

Diet of the Jellyfish

While their diet varies based on the species, all jellies have carnivorous feeding habits. Though a small number hunt using filter feeding and eat primarily plankton, the vast majority capture prey using their stinging arms and tentacles. They eat any small fish or crustacean that happens to drift into their stinging arms and become entangled.

Different species interact with humans in different fashions. People view many species as nuisances because of their painful stings. The stings of some species can even pose a danger to humans. People also commercially catch a few species as food sources.

Does the Jellyfish Make a Good Pet

No, you wouldn’t want a jelly as a pet. Many species grow quite large, and all have stinging cells on their arms and tentacles. Additionally, you couldn’t keep any other fish in your aquarium because they would sting them.

Aquariums keep many different species in their collections. Though the care varies from species to species, for the most part they have similar needs. Aquarists generally keep a gentle flow of water in their rounded tanks to prevent the jellies from drifting into the glass and injuring themselves. Most facilities feed them small fish or shrimp.

Behavior of the Jellyfish

For the most part, these creatures do not have complicated behavior. They can use the muscles in their bells to propel themselves, but they generally drift wherever the current pushes them. Most species do not actively seek prey, but eat whatever happens into their tentacles.

Reproduction of the Jellyfish

These creatures generally reproduce by expelling their eggs and sperm from their mouths. Fertilized eggs hatch into a larval life form known as a “planula.” This larva attaches itself to the bottom and grows into a polyp. That polyp then buds off several miniature versions of the adult Jellyfish, known as “medusas.” The medusa grows and eventually repeats the cycle. 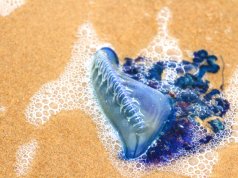